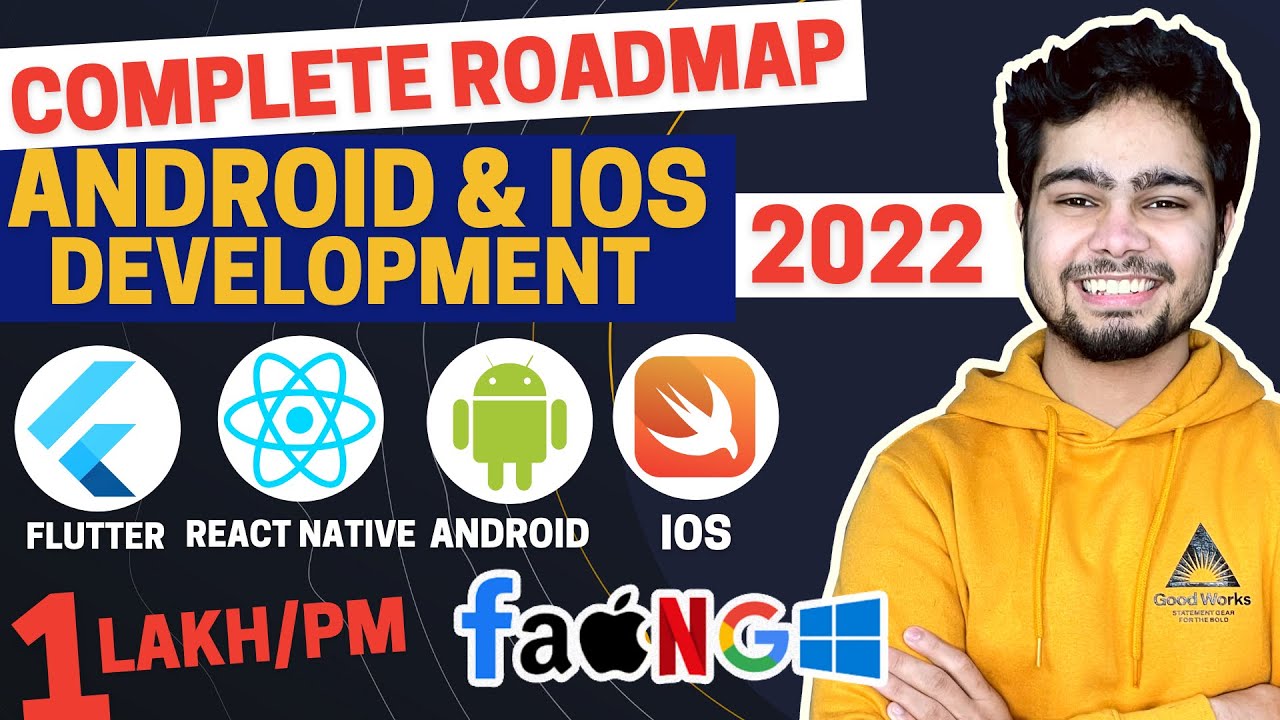 Hi guys. I am NIAHANT CHAHAR. I am a software engineer at MICROSOFT.

In todays video we are going to talk about Android development, iOS development and cross-platform development.

So, first of all I have iOS development because I am currently working at MICROSOFT on an iOS project.

In iOS, we are coding on Swift mostly, so for that I might be the right person to tell you what should be done.

Secondly, for Android and cross-platform I talked to AYUSH.

He is one of my friends, currently working at Cure.Fit He has an experienced of 3-3.5 years, he has been doing Android for like 3-4 years Way back in college he did freelancing and a lot of things as well.

He worked in Urban Company and then in Cure.Fit, so he has a lot of experience of Android, React Native flutter as well. So I have taken help from on these 3 things.

He told me about the resources he followed, what things are to be done.

We are going to talk about all those things in these Video.

Youll get all type of resources in it, what things should be done, which resources should be used Free or paid, we are going to talk about it all in this video.

These are very little things, for example which language is good for freelancing, Ill be telling that in the middle of the video so watch the video till the end, its going to be very helpful.

This is the roadmap, you need to do frontend mostly, the mobile app that you would be making, it would be frontend backend would be written separately.

Its the similar as you write in the web, you write the backend using the same languages.

So, in this roadmap Ill be telling you if you want to do IOS then which language should you do.

If you want to do Android, then which one should you prefer among Kotlin and Java, in todays date.

Apart from that, if you want to do cross- platform, which language should you use, Ill be telling that as well.

Lets move on to Frontend first.

Alright, now it contains three of it:- Android, cross-platform, iOS.

In Android, you have two options: - either we are doing it in JAVA or Kotlin.

So, I asked AYUSH bro, what is the scene? Which pone do the people prefer these days? So, he told me that, most of the apps are written in Kotlin, so Kotlin is more preferred as compared to JAVA.

But in the older apps are mostly written in JAVA, which are again made in Kotlin, they are being reprogramed again.

They are being shifted to Kotlin.

So, you can do Android development in Kotlin.

So he suggested me the UDACITY course for Android-Kotlin developer, which you can check it out and its free.

Now, the upper resources are free course and free resources.

Apart from that, you can see the courses from Recommended Udemy curses, you can do it from there, if your budget is low then.

And if you dont need personalized assistances, you are motivated of doing it yourself, so you can do the courses in Udemy.

But you all know the alternative.

Apart from that, he told me tell it, I have commented it. More preferred because all the new code is in Kotlin.

So you can prefer Kotlin over JAVA, as I know its not much of a difference.

Kotlin is easier then Java, when talking about Android development.

Rest, you can check out the resources from here.

Now, before moving on in the video, let me tell you about a very god free platform, named - CODE STUDIO.

If you want for DBMS, Basics of JAVA, Basics of C++, python, Java script Operating systems, etc. So, you get all the guided paths here.

You can check out, as you can learn things through their help.

Youll have a very good practice. Apart from that, there are 2000+ interview problems and you can solve them, you get company tags along with it and all your famous DSA sheets Either its of Striver bro or mine or of Love bro, you can watch it form here You get solutions as well and that too in all the three languages, in JAVA, C++ and python as well, so its amazing.

The link of the platform is in the description you can definitely check it out. Now lets move on in the video.

Next thing is the cross- platform.

There are two things in cross- platform:- React Native and Flutter.

Also, React Native is backed up by Facebook and Flutter is backed by Google, so both have a lot of a scope.

Apart form that, Flutters performance is better. He told that when we doing something of high-intensive then flutter is better.

So, many people shift their apps from React Native to flutter when they need High efficiency and high performance.

Also Flutter is better for freelancing, he told that as well because the bids are more for flutter. The flutter developers are less so and the demand is high.

So if you see from the freelancing point-of-view, then you can definitely checkout flutter.

You can learn Flutter, for that you have to learn Dart and to learn React Native, you need to learn Javascript and Typescript.

Now, I had told you about the resources for React Native in the previous video, youll get it as well.

Rest are the courses from UDEMY, so he suggested the Practical guide of React Native (2022 edition) and for flutter as well. He has done the courses in Udemy, they come in the 350-450 types. They are pretty good courses.

He told that you can definitely try out this one if you want to learn then.

Rest, youll also get the link of the playlist for the free ones, you can check out that too.

Next lets come on to IOS development.

In IOS development you need to learn two languages:- Swift and ObjectiveC.

These days no one codes IOS apps in ObjectiveC.

But, if there are older apps, if you are working in a company where a project is already been running You need some ObjectiveC to understand the code, that what exactly is happening.

But generally, all the work is being done in Swift.

Now, there are two resources for Swift:- a course from UDACITY and secondly Hacking with Swift.

I myself had used Hacking with Swift to study and second thing that I used to learn IOS development that was IOS &Swift- The Complete App Development. This is by ANGELA YU.

Its a very good course, I loved it a lot. The amount that I had to learn I understood it from here.

They have included many small projects, so that is also a good thing.

We learn by doing project, so you can check out this if you want to do IOS development then.

So we have talked about frontend, now secondly lets come on to the backend.

In backend, its the same scene as the web development.

If you have not seen the web development and you want to try web one as well then the link is there. You can definitely visit and watch there.

Now you need to learn frameworks, if you have learnt Javascript then itll be good, you can do Node-JS, you can easily write backend .

Along with it, you have an option FLASK, written in python, so you can do Flask after learning python.

I have given their resources in the web development, the link is here so you can check it out.

Apart from that, if you have learnt framework, then you should also have the idea about Databases.

Its of two types, now you can directly learn SQLITE and My SQL.

Apart from that, the options are Firebase by google.

If you are doing by firebase the connectivity is a lot easier and you can also use the database as well, you can host your applications So firebase is very good option.

Apart from that you have MongOD. So I had given all their resources in web development.

This is your web- development roadmap and you can checkout as well, if you are interested in web as well.

After that, Just as I had told, these are the courses which are recommended, so you can check it out.

Android development, IOS development, Flutter, React Native and in the starting I had already told it For the Android one, I have included both of JAVA and Kotlin, so you can check it out as well.

Youll get the link here.

Apart from that ,these are Youtube channels, Desi Coder is AYUSHs channel.

Apart from that , these are more channels- Programming with Mosh, FreeCodeCamp, The Net Ninja, Traversy Media, Amigoscode and CodeWithHarry.

They have free series on most topics, you can learn from there, rest Ill link it down.

Rest you can watch from the web development. You can make the project for similar apps, apart from that there are three more.

That I had thought of. First one is, you can make a clone of any app, either its of UBER or its of Youtube now the animations that you would making in it, all of it will be important, code yourself.

AYUSH had told me about it, I talked with him, if you code yourself itll be better, if therell be an Android developer, he might ask you questions How did you design the animation, what all things did you do and making clone is easy, its not something difficult.

Second project Idea is, You can make a WATER INTAKE TRACKER.

For example, you must have checked a lot of health apps, you have fitness watch, apart from that if you have heard about HEALTHIFY then it has a water intake tracker, you can make all these things.

Rest you can make the basic To-Do apps, you can check out in the web one as well, as I had given the idea for web its applicable here as well.

So the third one is, CRYPTO TRACKING APP.

Now in this you can track how much does the crypto fluctuate, you need to use the graphs for it, there would be many real-time things in the app.

So, Itll be a decent project when youll make, youll have fun.

So, these are the few Ideas which you can use.

Rest, Thank you so much for watching this video, if you liked this video then do like it.

Lets meet in the next video, till then BYE!